Do something with your photos. Seriously. Even if it just printing them at home. You would be amaze of the new dimension that your photos take. And I’m not talking about the physical dimension. Yes they turn from an intangible thing made of zeros and ones into this object that now you can hold, write on it, paint it, scribble on it, give it to someone, hang on your wall, rip it apart …

All that is great! But also they will get a different dimension in the intangible world. Something that you can’t put your finger onto. But you will look at them and they will look slightly different. You will see things that you didn’t see before in your screen.
Yesterday i printed a bunch of 4×6 just to see how they’d look like. Then I started to run out of ink … but it feels great to hold the photos.

Today i was visiting Daniel Milnor‘s website, this it’s been for a while already my daily mantra. And once again he made me feel like crap. Thank you Dan! Ok, maybe not like crap, but certainly made me feel I’m not doing anything at all. Which is a good thing because now I want to do. Scratch that. Now I’m doing. 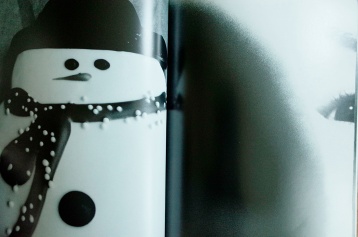 Since i started following him I have played around with the printing idea. Just printing for myself. You know, sometimes you have images that you like, but if you print them one by one you look at them in that way too, so they might end up feeling a bit disconnected. But if you print them in a book, booklet, pamphlet, … Anything that keeps them grouped under one common support you look at them as a body of work. Your brain immediately establish connections in between them.

Other times you just want to print something for fun, like when I did some stickers out of one of my photos. I always liked that photo. i printed it and put it in my wall, looks cool too. I printed the stickers and the picture looks killer. I gave some to friends, put one in my lap top, put another one in my external hard drive, even put one or two on dive bars. Damn Straight!

As for where to print your images … up to 8×10 i print at home. If I want/need something bigger either use some online service or local lab. For books, mags, etc, I have tried Blurb and MagCloud. So far I can say that Blurb does a good job with color reproduction but the magazine format from MagCloud is pretty cool and the paper feels just right … eventho the only time I tried it the messed up the colors a bit.
So yeah! Don’t be shy. There is no excuse. Open that Hard drive pull your Lightroom library and start printing shit. You won’t regret it.